tax preparation for people who have better things to do

2017 Update / Postscript as prescript
TaxChat was acquired by Ernst and Young and continues to be operated as a product offering by that company.

TaxChat was a startup in New York City aiming to disrupt the tax preparation business. They knew you have better things to do than tax preparation. The TaxChat app connected you to one of the best tax professionals in the U.S., entirely through a beautiful interface on your mobile phone.
Visit tax.chat

The world of tax preparation is huge - over 250 million returns filed annually, generating $9 billion dollars1. Yet the vast majority of tax preparation firms are small businesses with over half employing less than ten people1. There was a gap between the people needing tax preparation help and the army of available tax professionals. TaxChat saw this gap as an opportunity: make it easy for people to make a human connection through technology and make communication (via chat) the heart of their offer.

To make this idea come to life, TaxChat approached Infinity...and asked us to do it in 90 days. TaxChat presented the unique challenge of finding the sweet spot between minimum viable product (“MVP”) and feature-rich engaging experience that could disrupt the industry.

Our expectations of Infinity were high and the Infinity team has exceeded our expectations. Infinity is professional, creative, tireless, versatile, current and cohesive. The company works as one body with many heads – all of which bring to bear diverse experiences and expertise bases, but all of which share the same values, and the same commitment to excellence. When I say we could not have got the TaxChat product done in time for the 2016 tax season without Infinity, I mean that quite literally. Prior to engaging the firm, our software development effort was on a crash course with failure. But failure is not in the lexicon at Infinity. Your firm has been a genuine partner to TaxChat – an essential element of any success that we experience.

zero to end-to-end solution (in 90 days)

Infinity was presented with a nascent concept and blue-sky designers’ vision; mixing in a dash of pragmatism, Infinity brought the back-of-the-envelope concept to market. Infinity built a complex and robust system to support an elegantly simple, user-centered, interface. Like any new product, the scope was constantly evolving, requiring Infinity to be dynamic and flexible in the face of changing requirements. 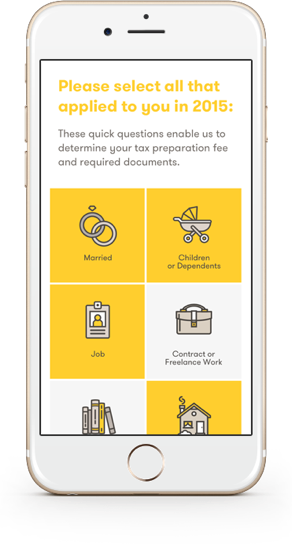 The core of TaxChat’s differentiation in the market is its chat functionality. By providing asynchronous communication through both chat and document sharing, supported by push notifications, TaxChat kept the user and their tax preparer connected throughout the tax preparation process.

TaxChat’s simple interface belies the complexities of what’s happening behind the scenes. In order to make the app appealing, it was critical that the app was simple and intuitive to use. The polished look and feel, animations and detailed microinteractions Infinity built into the app brought this to life.

As with most projects, the devil was in the details. A feature that seemed trivial when you were brainstorming in front of a whiteboard turns into a snarl of complexity once you start to implement it. For example, on TaxChat, one interesting (and unanticipated) challenge came with assigning clients to tax preparers. It seemed simple at first. It wasn’t. Algorithms were needed to keep it “fair” and distribution balanced, both on the level of individual preparers and across the different firms. The system also needed to deal with such mundane details as preparers going AWOL and not responding to clients (due to illness or other reason) where we’d need to reassign the client to a new preparer quickly and smoothly. And if we did it right, nobody would ever notice, despite all the hard work. (Or because of it.) We got there. 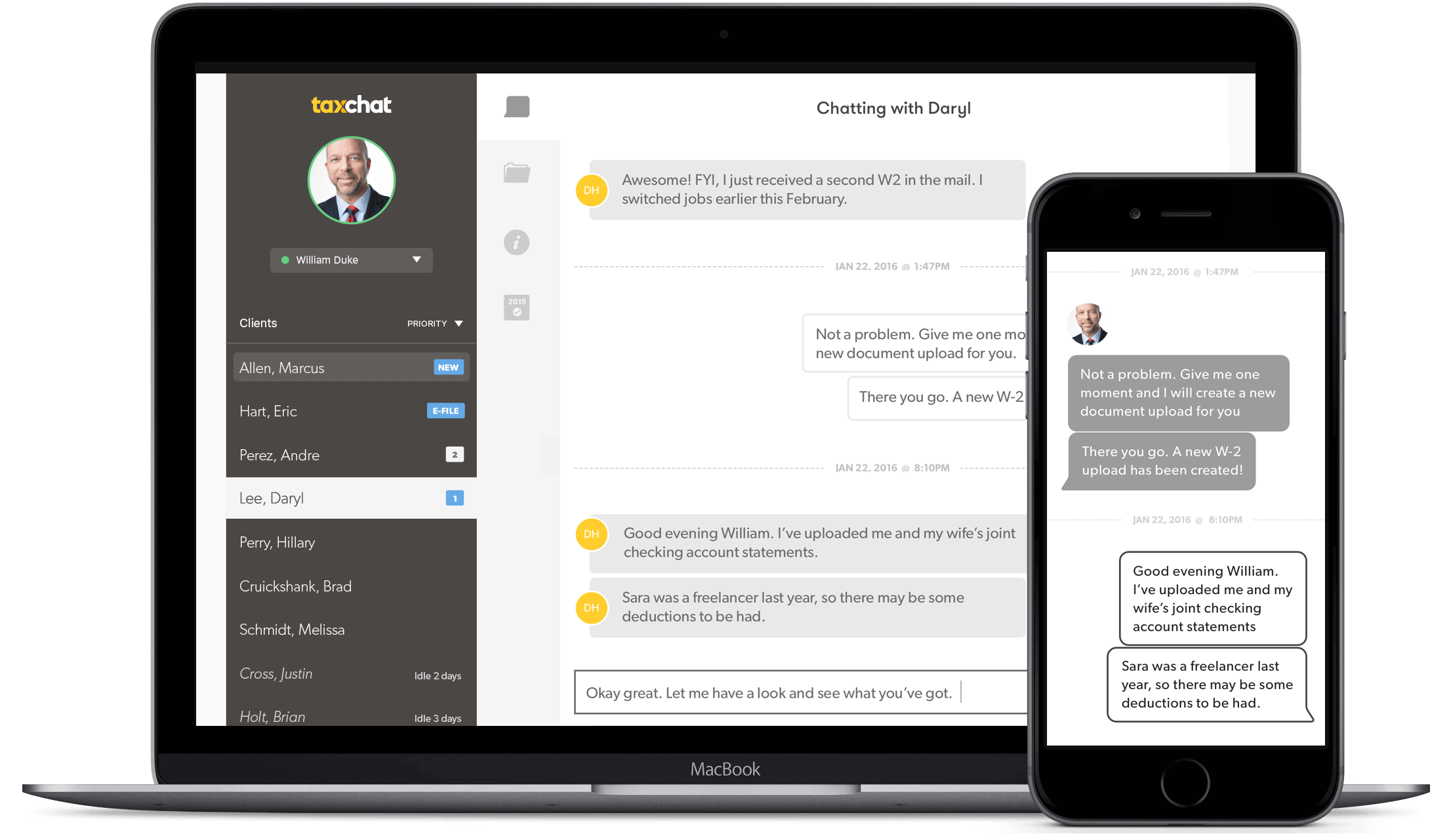 At the beginning, the TaxChat concept was as a client mobile app connected to a web app for preparers. As we dug into the desired features, it became clear that these apps were just the beginning. The TaxChat ecosystem grew to include an array of supporting components—a multitude of APIs, custom web apps for various types of users, communication management/push notifications and a slick marketing site. All of these needed to be woven together seamlessly to provide users with an experience that was fully-featured, data-driven, completely secure, and yet retained the engaging human touch provided by the centerpiece chat functionality.

Continuing our philosophy of technology agnosticism and using the right tool for the job, Infinity applied our expertise in Xamarin to create the iOS app (and set us up to be able to quickly port the app to Android), Node.js for the APIs (to give us the most flexibility and longevity), and Angular for the Web apps (to provide powerful client-side applications without concerns about cross-browser compatibility issues.)

Further, the choice of Xamarin as the mobile technology framework means that delivering an Android client in advance of next tax season is significantly easier, as the majority of the existing business logic code can be re-used. The use of AWS as the hosting technology for the API means that the system is already poised to automatically scale to meet usage demands.

Under an incredibly compressed timeframe, Infinity was able to create the entire suite of technology offerings needed to realize the TaxChat vision. The concept became reality.

In its pilot launch, TaxChat debuted on the App Store on February 16, 2016. The app has been downloaded over 8,200 times, seen over 320 accounts created, and has an average rating of over 4 stars. We can’t wait to see where it’ll go in year 2.